We are entering a new era, an era of sustainable development and renewable energy. Elon Musk is one of the leaders of a revolution that will change the way we perceive energy and its uses. It is the belief that Electric Vehicles will completely replace petroleum-powered cars by 2025. 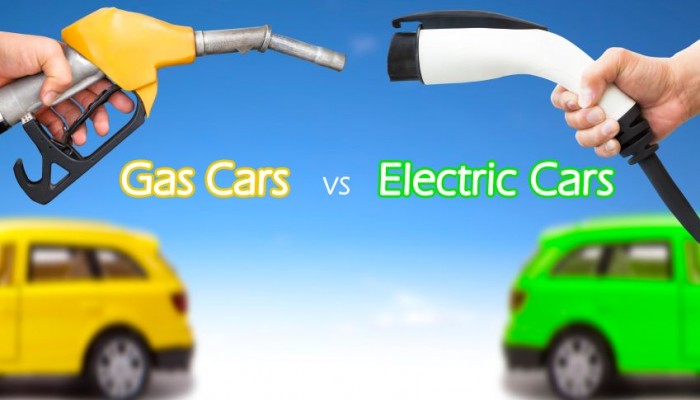 This is a very important time for all of us, because the concentration of CO2 is threatening to destroy the very essence of our planet. It is about time for all of us to realize that everything that affects the Earth influences us also.

Professor Tony Seba, from Stanford University, predicts that coil and oil will be redundant by 2030. He also implicates that the new internal combustion engine cars will be out of use in the 2025.

Seba doesn’t stop with cars. He implies that trucks, buses and other transformation will also be electrical. In the graph below, taken from the Seba’s book we can see a forecast of the declining cost of electrical vehicles. 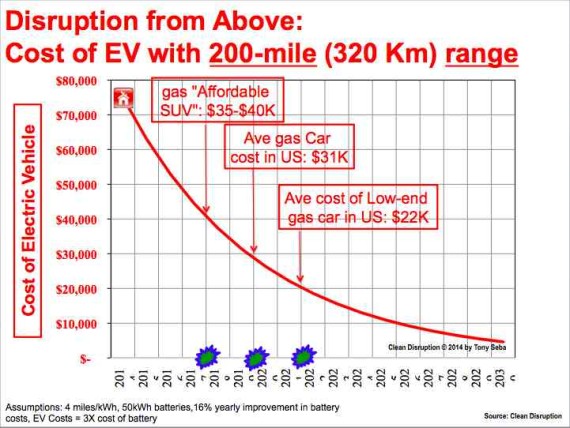 This is supported with a fall in price of the battery storage and furthermore with the release of the Chevy Bolt and Tesla Model 3. Both of them have a price around $35,000. This leads to a logical conclusion that high-tech Electric Vehicles will cost less than an average car in the US. If we take into an account the low-cost of electricity, and that we will be decreasing the carbon emission in the atmosphere, this is a win-win situation.

There is more. The internal combustion engine is around 20% efficient, while the electric motor is 90 to even 95% efficient. That is an enormous difference, and means that the electric vehicle is 5 times more energy-efficient. In the words of Seba “Combine that with the fact that it’s easier to transmit electrons (electricity) than atoms (gasoline or diesel) and you get that energy costs/mile are 10 times cheaper for Electric Vehicles.” This of course varies in different states, but the variation is negligible.

The Dutch already banned the usage of ICE from 2025, and the India’s roads minister said that by 2030 there will be only electric vehicles on the roads. This also implies that the forecast is not just a forecast. It makes perfect sense. Saudi Arabia plans to make $32 trillion by selling all of their petroleum assets, thus converting to a renewable energy era. Norway also plans to go fully electrical by 2025.

Tesla has developed a “master plan”, to make an autonomous electric transport network. In this network the revenues will be generated through the sales of miles, not the units. Seba implies a similar thesis. The falling cost of solar and battery storage are entirely changing the rules of the game. We are moving from a centralized to a distributed model, based on “zero marginal cost of production” rather than an increase in cost, as is the policy of the oil companies.

By making a shift to Electric Vehicles, we will have computers on wheels, rather than people. This can hopefully lead to the sharing of cars rather than owning them. That means less space for car parks, switching from 10% usage and 90% park space to 90% usage and 10% park space. Incredible, isn’t it?

Electric Vehicles – For a better world

All of this are just some of the benefits of Electric Vehicles in general. If we make a web of renewable energy, solar and others, we can hope to preserve our surroundings. Let’s all join hands and push the world in the right direction, the renewable energy era. See you soon.

Join in our msiling list for updated products info.